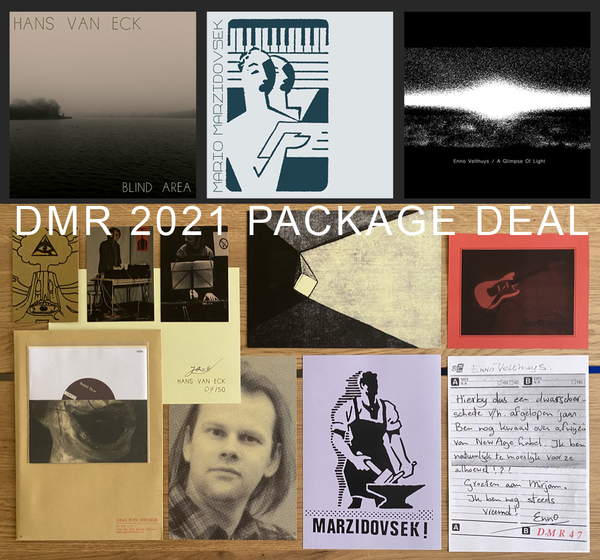 The 2019 Stroom〰 split EP with Hessel Veldman marked the long-awaited vinyl debut of Enno Velthuys and served as a teaser for a reissue campaign of his work, shared between different labels. Finally!

In 1984 Velthuys released his classic tape ‘A Glimpse of Light’ on EXART, the label of Veldman, who stayed in close contact with Enno after hearing one of his private tapes being played on the radio by Willem de Ridder in 1980. During a live-broadcast event random tapes were played. “From Enno Velthuys, The Hague”, was written on the package. Willem introduced the tape, played it and a serene silence filled the studio. Present was a friend of De Ridder, Rob Smit, who visited Enno and his mother a few weeks later. This eventually resulted in Enno’s first release ‘Ontmoeting’ on KUBUS Kassettes in 1982. In those years, Enno was living a solitary life and rarely left his mother’s apartment. He managed to release 6 tapes of introvert, melancholic music from another dimension. Atmospheric melodies backed with sparse percussion, showing an excellent handling of the synthesizer.

The gifted musician with two souls silently passed away in 2009. Now we present, with involvement of the few once close to him, the first reissue of probably his most beloved work. Using the original master tape from the EXART vaults, carefully transferred, edited and remastered. Just Enno with his stripped-down compositions and fragile ambient sounds. An intimate experience celebrating bedroom-music and the glory days of do-it-yourself counterculture.

Mario Marzidovšek (1961-2011) was a member of the international mail-art network, painter, poet, cassette culture pioneer and a key figure of the Yugoslavian underground scene. Influenced by the electro-acoustic avantgarde he began to explore electronic music in the late 1970’s. Like an erupting volcano he released numerous tapes between 1984 and 1987, before aborting his musical activities to move on.

Marzidovšek was truly living an industrial lifestyle as an employee of a chemical factory. His Minimal Laboratorium, filled with homemade devices, old instruments and tape recorders, was the central part of his musical creativity. Using limited equipment forced him to be resourceful and made sure the raw punk-spirit was always present in his electronic music, slowly shifting from harsh industrial polka to lo-fi wave, ambient and barbaric techno.

Brutal Alter Minimal is a collection of tracks from 1985, using the master tapes send to Nihilistic Recordings the same year as source material. Authorized by the Marzidovšek family, this compilation stands as a testimony to a true legend expressing his sheer creative powers. Includes printed insert.

Hans van Eck started composing music in 1976 and was trained in electronic music at the Institute of Sonology by Jaap Vink, Frits Weiland and Gottfried-Michael Koenig. He studied Musicology at the University of Amsterdam and received lessons in composition by Daan Manneke. His works are performed all over Europe by his own Schreck Ensemble and others.

The Blind Area cassette, released in 1987 by Decay International, compiles several of his early electronic compositions. They serve as an evocation of the blind areas of our minds where only fantasy, intuition and imagination can guide us. Music as a means to illuminate the hidden parts of our soul to discover the mythical world behind everyday life.

For this reissue, 3 central pieces of the original tape are complemented by 2 more recent compositions of somber timbres. Industrial undertones, open spaces and slow waves of pure, refined sound are the key ingredients, but Van Eck adds a subtle, narrative structure for a hypnotic, haunting and elegant experience. A self-contained world with echoes of predecessors like Jean-Claude Risset or Guy Reibel.